How does HSCT work?

All immune cells in the body originate from a common progenitor, known as a hematopoietic stem cell (HSC) found in the bone marrow. As the HSC divides, it gives rise to a wide diversity of immune cell repertoire that all serve specific immune functions. Many of these immune cells, known as lymphocytes, are capable of recognizing and defending against foreign pathogens that enter the body.

For an, as yet, unknown reason, some of the lymphocyte immune cells develop a corrupted memory in which they become self-intolerant and attack & damage different cells and tissues of the body. In the same manner as normal cells divide, so does the mutant auto-toxic cell clone, giving rise to a large population of autoreactive cells that mediate damage of different normal structures..

Autoimmune damage of myelin is associated to MS, NMO, CIDP and TM. This is the fundamental mechanism that underlies autoimmune disease and using chemotherapy to eliminate these self-intolerant auto-toxic lymphocytes is the key to also halting the underlying autoimmune disease. The immune cells eliminated from the body are eventually replaced with new immune cells created in the bone marrow, which do not contain toxic corrupted cells, thereby halting the underlying disease activity

What are the benefits of HSCT?

The aim of the entire HSCT treatment process is to stop the immune system from causing damage of the myelin so that proper electrical conduction within the nervous system is restored. In addition to the halting of the underlying autoimmune disease, the reinstatement of appropriate healthy signaling from nerves to muscles often results in clinical and symptomatic improvement.

What happens during HSCT?

What we will do to treat your condition in Clinica Ruiz, is remove auto-toxic immune cells from your system using both pharmacological as well as biotechnological drugs, followed by reinfusion of healthy precursor hematopoietic stem cells, known as the autograft, to begin producing new immune lymphocytes that will not attack cells or tissues of the body.

In an early step of the treatment process, we will mobilize hematopoietic stem cells to your peripheral blood, and then harvest them by means of apheresis; a non-surgical procedure similar to dialysis where a patient’s blood is passed through a filtering machine by IV. Most patients can collect enough stem cells in a single sitting, but occasionally more than a single day may be required for the apheresis procedure.

After your stem cells have been collected, chemotherapy is administered to further eliminate immune cells responsible for the underlying autoimmune disease. Since drugs cannot selectively destroy auto-toxic immune cells, the only way to assure their removal is by wiping out all forms of dividing immune cells. This is why you will experience a temporary transient immunodeficiency during which you will have to undertake special precautions to avoid and prevent infection. ?

When the cleaning of the immune cells is completed, your hematopoietic stem cell autograft will be retrieved from storage and infused back into your bloodstream. Stem cells have the ability to naturally “home” into your bone marrow and start dividing again in a healthy manner to repopulate your system with new immune cells. This is known as engraftment.

After a period of time your immune system will be restored with healthy cells, and devoid of auto-toxic cells. The aim of the entire HSCT treatment process is to stop the immune system from causing damage of self.

Patients with a confirmed positive diagnosis of the following neurologic disorders are eligible for HSCT treatment: 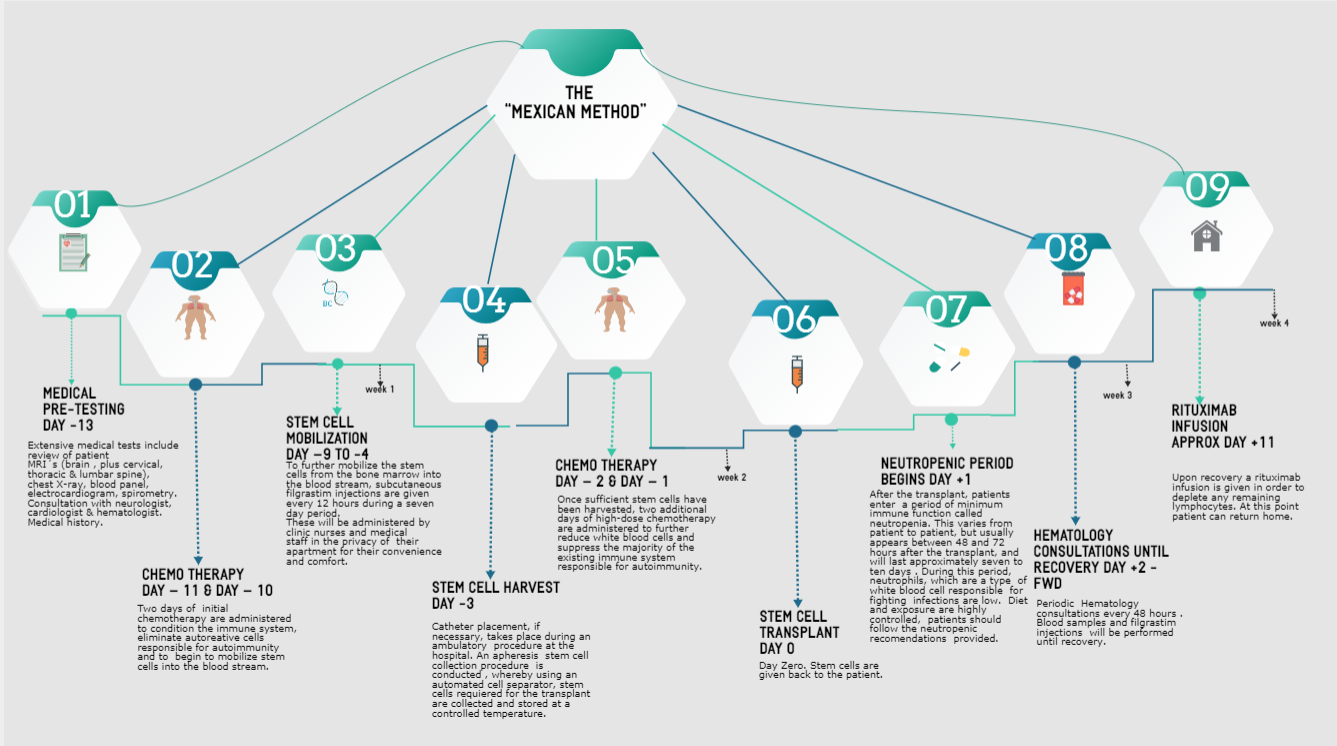